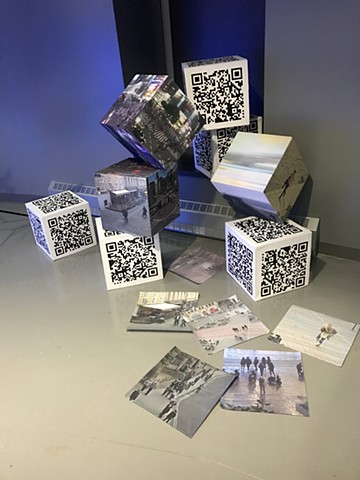 This work was designed as a companion piece to a six week graffiti project executed in ten countries in 2014 with collaborator, Remina Greenfield.

QR Code Project (See Through Me) is an interactive digital art initiative that explores the power and implications of surveillance technology in the urban environment.

The project uses QR codes to link to dozens of public surveillance feeds from around the world. Over the past two years the artists have installed these codes in cities using guerrilla strategies such as (stickers, stencils, etc).

Individuals scan the codes to access civilians who are currently being surveilled: neighbors, strangers six times zones away, or occasionally, themselves.

The QR codes have been installed in over 10 countries as the project becomes increasingly global in scope.